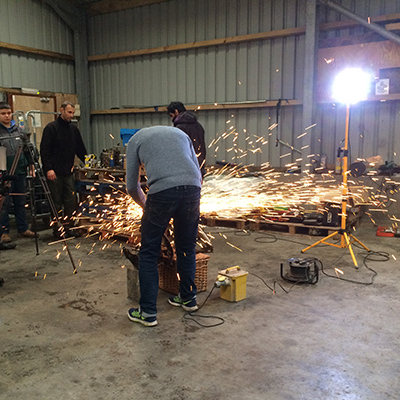 Our project is a design manual and prototype for an energy storage machine, made by a local community using its own spare parts and expertise, the basis of which is a gravity battery that we call The Newton Machine.

The CCCB jury, which included Laura Faye Tenenbaum, science communicator at NASA Jet Propulsion Laboratory, said that “it empowers people to take responsibility and to use local resources and expertise to face their own challenges… The Newton Machine is honest in that it accepts that there is no universal solution to such a multifaceted issue as climate change”.

In October, we traveled to the island of Eday in Orkney, Scotland, to spend a week with our hosts, Eday Renewable Energy Ltd. (supported by the Eday Partnership). There, with the extraordinary self-determination of the islanders, plus the contents of their houses, bothies, and sheds, together we built the Eday Newton Machine in three days – from scrap parts and found tools.

James Auger and Julian Hanna, members of the Reconstrained Design Group at M-ITI, have been blogging the development of the Newton Machine as part of their Crap Futures tumblr.

I have been keeping an ethnographic notebook during the whole project. And, as a result of my fieldwork, I have composed and created ‘Newton Machine: an Instruction Manual’, a single handmade book to be exhibited at the gallery. A copy of the text of this art book will also be reproduced in the exhibition catalogue.

The Newton Machine will be exhibited at CCCB in Barcelona from February 2018, as part of their ongoing After the End of the World exhibition. The exhibition will feature several working prototypes, a short film documenting the making of the Eday Newton Machine (made by film-maker Aaron Watson), photography, and ethnographic materials.

An open source design manual for The Newton Machine, in the form of a Wiki, will be shortly available. Work with your neighbours to build one yourself…

Details of the Newton Machine exhibition at CCCB Art Gallery, Barcelona (from 1 February 2018)