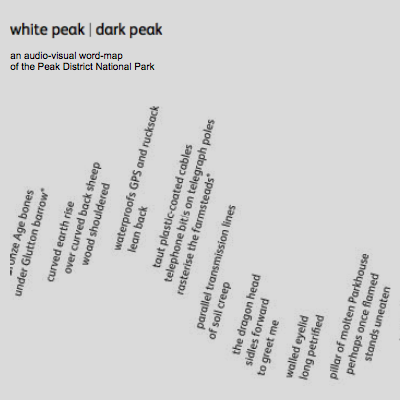 During 2009, I was invited to participate in the collaborative poetry project White Peak Dark Peak. The project, led by landscape poet Alec Finlay, created an audio-visual word-map of the Peak District National Park. The online word-map of poetry was accessed via QRcodes found in the landscape.

For the project I composed two poems as I walked, connecting each verse with a GPS location in the landscape. These were turned into lithograph prints, that were included in both the online word-map and in a printed book.

The poems were also published in a book White Peak, Dark Peak, whose imagery also captured the shifting line of hills that made the landscapes through which the poems move.

The project was a commission from Re:Place.